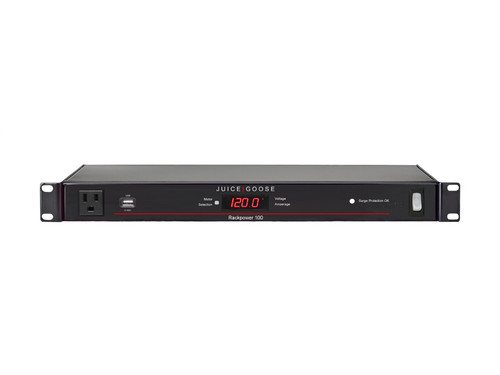 Call Us E-Mail
Space for FreshClicks if required

USB Ports - One USB port is provided on the front and one on the back of the chassis. These five volt DC connections are usable for utility lighting or powering accessories. Connect an inexpensive, flexible USB light fixture for lighting in the front or back of the rack. Both USB ports can also be used to charge accessories including an iPhone or iPad.

AC Power Receptacles - One AC outlet is located on the front. Nine are on the back. The rear outlets are rotated to accommodate wall warts and include extra generous spacing between four of them. Model RP 100-20A includes a single NEMA 5-20R, rated for a twenty amp load.

Replaceable Surge Protection - Three layer, fast acting surge protection includes an indicator LED on the front panel to show that protection is functioning. If the LED goes out, indicating loss of protection due to a surge event beyond the limits of the protection components, the surge protection module can be easily removed and replaced.

Tour Class (TM) Chassis - This professional grade enclosure is formed from a single piece of cold rolled steel. Reinforced mounting brackets and a flush mount top complete a package that's been used to rack mount other products weighing over 200 pounds.

JG 8L   The JG8 Series family of power and light modules includes three great, economical models. The eight switched AC power outlets on the back of each unit are rotated to better accommodate...
MSRP:
Was:
Price: Now: $149.00
Add to Cart
Quick view

SQ-1500 The SQ-1500 is an economical power sequencer for single rack applications when local or remote control is required. Remote activation with a latching contact closure makes installation and...
MSRP:
Was:
Price: Now: $269.00
Add to Cart
Quick view

CLP-02 24 CASE PACK CHAUVET® encourages customers to make safety a priority by utilizing the right clamps and cables for their lighting applications. Made of cast iron or cast aluminum,...
MSRP:
Was:
Price: Now: $191.76
Add to Cart
Quick view

Meet the new XLS DriveCore™ 2 Series The next generation of XLS got a makeover with a sleek new look, a LCD display that is three times larger, and more DSP with higher capabilities...
MSRP: $499.00
Was:
Price: Now: $339.00
Add to Cart
Quick view